During week three Rick Steves and Samantha Brown travel to the Czech Republic, Germany, Canada, China, California and Oregon. Below you’ll find travel logs, links to more information about each episode, additional educational materials on PBS LearningMedia related to the countries and topics, and maps tracking our progress!

Rick Steves: Prague
View map
The capital of the Czech Republic, Prague is the best-preserved Baroque city in Central Europe. Experience its massive castle, beloved statue-lined bridge, historic Jewish Quarter, and thrilling 20th-century history while enjoying its infectious love of music. With a beautifully preserved Old Town, Prague deserves its nickname: the Golden City of a Hundred Spires. Learn more about this episode.

Samantha Brown: Orange County, California
View map
With its 42 miles of coastline, Orange County is one of the most picturesque regions in the USA. Stretching in between LA and San Diego, it’s a beloved playground for surfers, artists, and a few Real Housewives. Meet legendary surfer, PT Townend, hop aboard the oldest privately owned ferry in the world, learn about the vibrant Vietnamese community in Westminster, and assist in the release of a sea lion back to the wild. Learn more about this episode.

Rick Steves: Berlin
View map
A tumultuous 20th century left Berlin filled with powerful sights — from evocative memorials, to surviving bits of its communist and fascist days, to its glass-domed Reichstag. Enjoy its now-trendy east side, its people-friendly riverfront, and its vibrant social scene. Reunited Berlin — perhaps the fastest changing and most happening city in Europe — is entertaining more visitors than ever. Learn more about this episode.

Samantha Brown: Montreal, Canada
View map
From immersive to interactive, Montréal is a city that puts on a show of artistry in practically everything. From hidden alleyway bicycle tours to its world famous Cirques Festivals, the “City of Saints” will surprise and inspire you. Learn more about this episode.

Rick Steves: Germany’s Hamburg and the Luther Trail
View map
Hamburg, Germany’s mighty port city, has risen from the ashes of World War II with a gleaming new skyline and a brisk creative energy. From there, visit the great historic sights of Martin Luther and the Reformation (Erfurt, Wittenberg, and Wartburg Castle) before finishing in the capital of Franconia: wine-loving Würzburg. Learn more about this episode.

Rick Steves: Germany’s Dresden and Leipzig
View map
Saxony, part of the former East Germany, remains a secret to most travelers. Visit the two great cities of the region: the capital city of Dresden, with the opulent palaces and art treasures of the Wettin dynasty, and Leipzig, with its Bach heritage, a massive monument to the day Europe beat Napoleon, and museums remembering its communist heritage. Learn more about this episode.

Samantha Brown: Hong Kong, China
View map
Hong Kong is truly dazzling, with soaring modern skyline surrounded by spectacular nature. However, once you start wandering through the city, you’ll find tucked away in corners with gems waiting to be discovered. From traditional restaurants to artists who don’t take themselves too seriously, Hong Kong is an ultra-modern city with a personality all its own. Learn more about this episode.

Rick Steves: Germany’s Frankfurt and Nurnberg
View map
Skyscraper-studded Frankfurt — with so much commerce it’s nicknamed “Bankfurt” — has a delightful-to-explore old center. Also visit Nürnberg, a capital for both the First Reich (the Holy Roman Empire) and the Third. From its towering castle and playful fountains to its Nazi Documentation Center and maze of underground bomb shelters, Nürnberg is a fascinating study in contrasts. Learn more about this episode.

Samantha Brown: Greater Palm Springs, CA
View map
Palm Springs and the Coachella Valley are not only a desert oasis, but a bonafide lifestyle. Visitors started flocking to this playground in the 1920s for rest and relaxation. From mid-century modern design to sprawling, otherworldly landscapes, it’s easy to see why Greater Palm Springs is a place to love. Learn more about this episode.

Our trip’s progress at the end of week three: 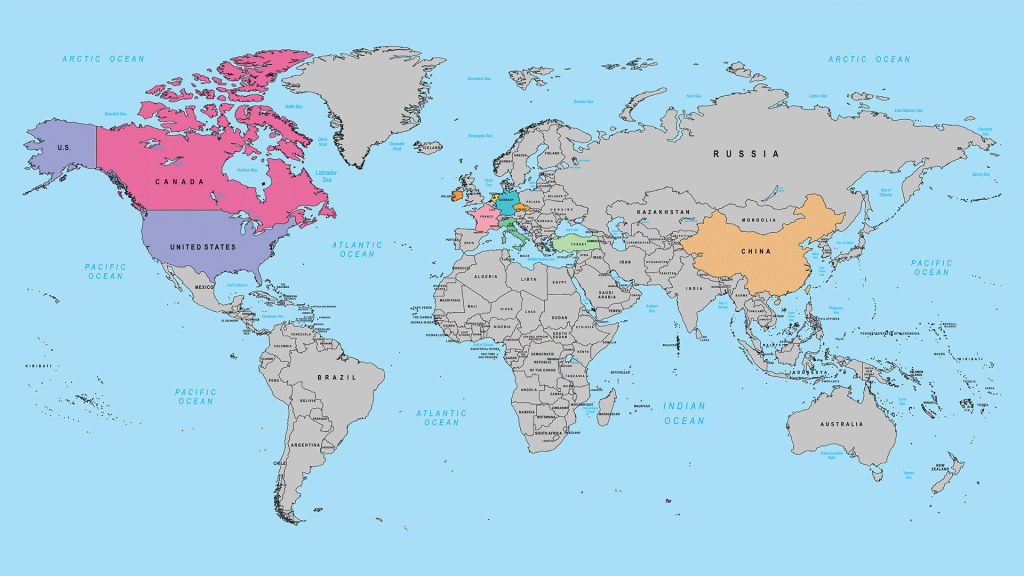