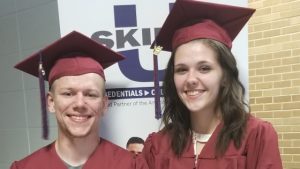 One child, one car, one goal = Two GED® Credentials

Not every person without a high school diploma made a decision to quit school.  Sometimes circumstances arise that impede one’s ability to meet the seat time, credits, or attendance requirements for high school graduation.  This was the case for Breanna Dever.

Breanna grew up in Louisville, KY with her mom and an older sister.  In 2011, she sustained a concussion in an accident.  As she recovered, her mom lost the home they were living in.  She moved in with her boyfriend for a while until her mom found an apartment.  By then, she was expecting a baby and had fallen far enough behind in the requirements for high school graduation, she couldn’t attain it.

She gave birth to a son, Brandon.  Moving often, she spent time living at her in-laws and extended families homes, which included her grandmother’s, her boyfriend’s mom’s and her own mother’s place.  When she and her partner, Michael, moved to Hardin county things started to settle in.  They were young adults, living on their own, trying to raise their son. This was difficult ad neither had a high school diploma.

“Michael was working at Skyline Chili making $300 every two weeks.  We couldn’t make it and have what we needed.  I knew we had to do something to change things,” Breanna said.

She searched online how to get a diploma and luckily she found a number for the Hardin County Adult Learning Center (Skills U).

“I called and talked to Carmen, who explained that I could come there to take classes for free but we only have one car so there was no way we could manage to get to class, get to work, and take care of our son all at the same time.  Then, Carmen told me about FastForward that would let me work on my classes at home and only come to the center for testing.”

Breanna and Michael enrolled and started the journey toward getting their high school equivalency credentials in hopes of getting better jobs to support their family.

“It was hard.  Trying to work, care for a kid, juggle only one car and study was tough, but it was worth it,” she says.  “I liked FastForward because I didn’t have to keep my nose to the grindstone in one subject all the time.  I could switch around to study different things and I could do it when I had the time, not on a schedule set by someone else.”

“It took incredible effort and commitment to balance all these two had going on but with one car and one goal in mind, they did it,” exclaimed Diane Kelley, Director of Hardin County Adult Ed Skills U.  “We are so excited that they have both accomplished the goal of their high school equivalency credentials!

The staff at the center says it has been rewarding to see the couple succeed. They say Breanna and Michael have “one child, one car, one goal, two diplomas”.

“They put in an equivalent amount of hours online to students who come to the center.  This takes tenacity and determination.  Lots of students struggle to spend enough time online on their own but not Michael and Breanna.  They stayed focused.”

Michael earned his credential in January 2018 and Breanna completed hers in March 2018.  It took both of them just about one full year to complete the course of study and pass the exams.

“It’s worth it and is already paying off,” says Breanna, who just got a new job paying $3 more per hour plus gives her benefits.

Sometimes, circumstances and odds are stacked against a person but just like Breanna and Michael, it’s never too late to go up against the odds.

If you or someone you know could benefit from a high school credential, log onto KET.org/fastforward or contact your nearest Adult Education Skills U center.