A geologist and a science teacher show students how to identify and date rocks as they explore Jenkins Pound Gap in Letcher County. This is the first site in Kentucky designated as geologically significant. Geologist Frank Ettensohn and teacher Kim Alexander discuss how early settlers used the Pound Gap as an easy crossing through the Pine Mountain Ridge. As students see how layers of rocks formed and moved over time, they’ll see examples from the Devonian through the Mississippian to the Pennsylvanian periods, with lots of explanations and visible examples of aging.

Dr. Frank Ettensohn, a University of Kentucky geologist, leads students on an exploration of Letcher County’s Pound Gap. At this cut-through near Jenkins, weathering and erosion have exposed layers of rock dating back to the Devonian Period, including abundant brachiopod fossils. Ettensohn and science teacher Kim Alexander show how to identify and date rocks, point out examples of various types, and explain how rocks are classified.

About the Electronic Field Trip Through Geologic Time

Trip Through Geologic Time
We begin at the bottom of the outcrop 360 million years ago with an explanation of how layers of rocks formed and moved over time. We’ll gradually move from the Devonian through the Mississippian to the Pennsylvanian periods, with lots of explanations and visible examples of aging.

Geologic Effects
While on the tour Dr. Ettensohn explains how weathering and erosion caused the formation of a gap which had cultural and economic effects on the region. We can see how environments move “in and out” through time.

Types of rocks mentioned on the field trip: shale, sandstone, coal, limestone, dolomite. Properties of rocks are discussed in terms of color, texture, and hardness.

Conclusion
A chance meeting with another geologist at the outcrop leads to an interesting discussion of caves.

Join us as we travel through geologic time in Kentucky! 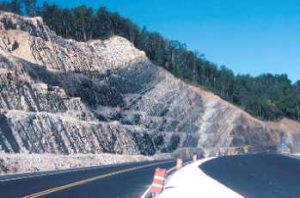 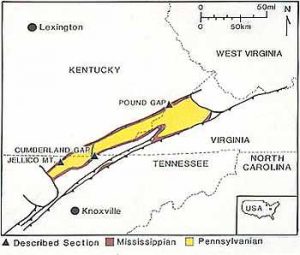 Pound Gap is an opening in Pine Mountain, a long linear mountain that runs almost north and south for about 125 miles along the Kentucky and Virginia border. Pine Mountain spans three Kentucky counties: Bell, Harlan, and Letcher. For a distance of nearly 90 miles, no stream cuts through the mountain, and there are no natural crossing points, making it an effective barrier to migration and transportation.

People had to get over this mountain and would do that at the easiest spot to cross. A fault bisects the mountain at Pound Gap, and weathering and erosion have created a hole in the ridge. This opening made it easier to cross the mountain there. Pound Gap was on a pioneer trail into the state, but most of the first pioneers passed through without settling. The Letcher County terrain was rugged and mountainous, with narrow but fertile valleys. 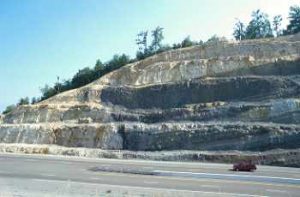 Pound Gap had strategic importance during the Civil War. Both Confederate and Union armies used it to move troops over the mountain, and several skirmishes took place there. 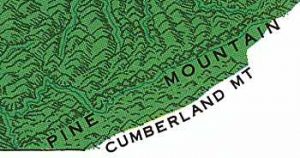 Compare the two maps below. You can also visit this Kentucky Geological Survey page for physiographic information, a geologic time machine, and more details. 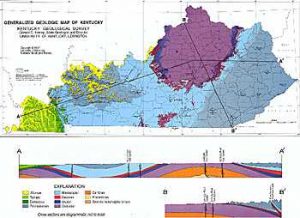 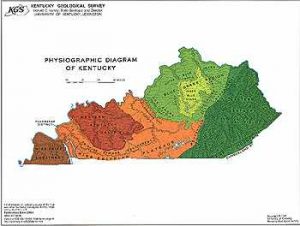 Pine Mountain forms the northwest boundary of the Cumberland Overthrust block. It is the upturned edge of the block where rock strata have been brought to the surface by displacement along the Pine Mountain Overthrust block. Displacement has caused the rocks to be tilted up at sharp angles. The exposed strata that we see today would normally appear about 2000 feet below the surface of the earth. The movement occurred about 270 million years ago in the Permian period when the Appalachian Mountains were being formed by continental plate collision. Resistant sandstones in the Pennington and Lee formation were deposited 315 to 325 million years ago.*

Why is Kentucky like the Bahamas?
Because 350 million years ago Kentucky was a basin filled with shallow, warm water (like the Bahamas) and we can still find the brachiopods (fossils) all over Kentucky to prove it. Kentucky has many limestone rocks with animals preserved as fossils. These animals were originally marine animals from warm, shallow water–just like the Bahamas now.

How do you know how old rocks are?
The easiest way to date rocks is look at the type of fossils in the rock and compare that to what scientists have already decided was going on at that time.
If rocks don’t contain fossils then geologists have dated specific types of rocks radiometrically. We carry that information to this–using correlation and inference. Volcanic ash is used to date rocks that contain things that were current at the time of the volcanic event.

How did you know you wanted to be a geologist?
I used to find fossils as a kid when I grew up outside Cincinnati, Ohio. My mother used to let us look for rocks while she shopped.

What does studying rocks tell us?
Rocks tell us about the history of the earth. Each layer is like a page in a book–if you know the language you can read the book. Rocks show you environmental change through time. Remember, The present is the key to the past.

How do rocks help us today?
Rocks are important to our ecomonics because oil and coal are found in rocks. Other rocks are important building products. Limestone is used in road construction, steel-making, concrete and cement.

Why do geologists taste rocks?
It’s an easy way to find the presence of silt, which in some cases is too fine to be felt by hand. Silt helps identify rocks. It tastes gritty…don’t taste too much, you only need a little!

Do you have a favorite rock?
My favorite rock at the Pound Gap outcrop has a lot of brachiopod fragments. There are so many I call it “brachiopod hash!”

Rock – Any naturally formed material composed of one or more minerals having some degree of chemical and mineralogic constancy.

Mineral – A naturally formed chemical element or compound having a definite chemical composition and, usually, a characteristic crystal form.

Sediment – Solid fragmental material, or a mass of such material, that originates from weathering of rocks and is transported by, suspended in, or deposited by air, water, or ice, or that is accumulated by other natural agents, such as chemical precipitation from solution or secretion by organisms, and that forms in layers on the Earth’s (or other planet’s) surface in a loose, unconsolidated form; e.g., sand, gravel, silt, mud.

Limestone – A sedimentary rock consisting chiefly of the chemical calcium carbonate, primarily in the form of the mineral calcite (more rarely, aragonite).

Clay – (a) A rock or mineral fragment or a detrital particle of any composition (often a crystalline fragment of a clay mineral), smaller than a very fine silt grain, having a diameter less than 1/256 mm. (b) A loose, earthy, extremely fine-grained, natural sediment or soft rock composed primarily of clay-size or colloidal particles and containing a considerable amount of clay minerals (hydrous aluminum silicates).

Shale – A fine-grained, indurated, sedimentary rock formed by the consolidation of clay, silt, or mud, and characterized by very thin layers, and by a composition with an appreciable content of clay minerals, and commonly with a high content of quartz sediment.

Sandstone – A medium-grained sedimentary rock composed of abundant fragments of sand size, more or less firmly united by a cementing agent; the consolidated equivalent of sand, intermediate in texture between conglomerate and shale.

Sand – (a) A rock fragment or particle smaller than a granule and larger than a coarse silt grain, having a diameter in the range of 1/16 to 2 mm. (b) A loose aggregate of unconsolidated mineral or rock particles of sand size.

Gravel – An unconsolidated, natural accumulation of rock fragments resulting from erosion, consisting predominantly of particles larger than sand (diameter greater than 2 mm), such as boulders, cobbles, pebbles, granules, or any combination of these.

Calcite – The most common crystalline or mineral form of calcium carbonate; a common rock-forming mineral.

Barite – The crystalline or mineral form of barium sulfate.

Gypsum – A widely, distributed mineral consisting of hydrous calcium sulfate; it is the most common sulfate mineral.

Fluorspar (fluorite) – The crystalline or mineral form of calcium fluoride.

Sphalerite – A crystalline or mineral form of zinc-iron sulfide.

Galena – A crystalline or mineral form of lead sulfide.