Take a trip through time to the nineteenth century in Eastern Kentucky. The Mountain Homeplace is an interpretive working farm in Paintsville, Kentucky. Local author, John David Preston, provides historical perspective on the development of the region. Re-enactors demonstrate what rural life was like from 1850-1875.

On this trip, students:

At the Mountain Homeplace, an interpretive working farm in Paintsville, reenactors show what life was like for settlers in the mid-19th century.

Questions and Answers about early life in Eastern Kentucky

What was life like in eastern Kentucky around the middle of the 19th century?

Early life in Johnson County around 1850 can be described as rural, isolated and self-sufficient. It was a very rural county at the time. There were probably only five thousand people in the whole county – compared with 24 thousand people now. 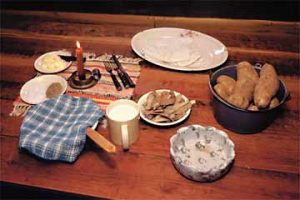 Home cooked meal
Meals were prepared from food grown on the farm. Cooking was done over a wood cookstove.

What kinds of jobs did people have?

Nearly everybody, except for a few people in town who were merchants, was a farmer. People were farmers. They raised crops. They also cut timber and did a variety of things related to the land. When I say they were self-sufficient, they had to raise or produce on their farms nearly everything that they used. 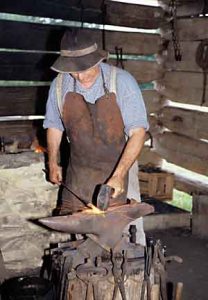 People raised wheat. They had vegetables. They had animals for milk and for meat. Because of the problem of getting goods in from other parts of the country–because of the lack of transportation system, they had to raise and produce just about everything they needed. 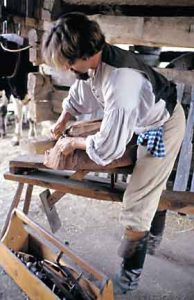 What was the biggest challenge for Kentuckians around 1850?

The biggest challenge was survival. You have to remember in 1850, this county (Johnson) had only been formed about three years and had only been about two generations since this was absolute wilderness.
The challenges of being isolated were that schools were hard to find and locate. And it was difficult for people to develop schools. It was difficult to obtain medical care. People had much shorter life expectancies at that time and it was difficult to get from one place to another. It was a day’s ride on horse to get to the county seat, so people had a lot of challenges just from day to day existence. 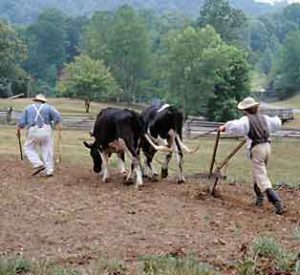 Plowing with oxen
Oxen were used for plowing the fields. Early settlers had to provide all the food and goods they needed to live.

Where did people settle when they first came to Eastern Kentucky?

The first settlements were down on the river and creek bottoms. You know we have two types of land here. We have hills and a fairly small amount of river and creek bottoms. And the first people that arrived got deeds to the bottoms. In fact, if you look at some of these, they look like they’re snakes because people would get a deed or a land patent to a long, thin piece of land that covered a whole lot of river bottom. People who arrived later took the land farther away from creeks and farther away from rivers and got the less desirable hill land. And so you saw some interesting patterns that develop at that time. 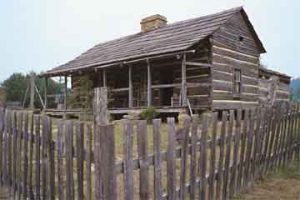 Where did people come from who came to Kentucky in the 19th century? 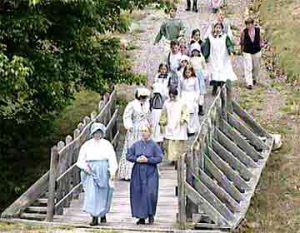 What challenges did Kentuckians face in the 19th century in getting an education?

Schools were very hard to come by in this part of the country. You know, people moved here about 1790-1800. But it was many years after that before they actually started building schools. And for a long time, it was very difficult if not impossible for a child to obtain an education. But by the middle of the 19th century, around 1850, there were schools and nearly all the kids by that time were in school. 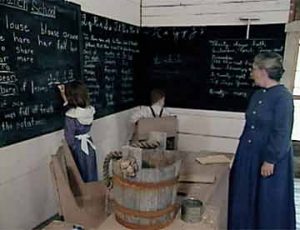 School
Students often walked long distances to attend school. This is a one-room schoolhouse. The teacher would teach many grade levels together.

Now these fences you see around here what commonly called a worm fence or simply a rail fence. Now they are common because we have such an abundance of raw material, timber and the like. Especially the American Chestnut is so good. It grows fast and you can split it well. It’s bug resistant and rot resistant. All these fences are made of it. 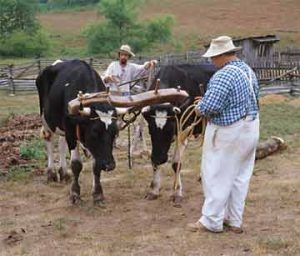 Oxen
Oxen were used for plowing the fields.

Why is it important to be able to do carpentry and woodworking in addition to farming?

A lot of folks around here can’t afford to not be a carpenter or a woodworker. You have to be a farmer and you have to be a carpenter and cobbler. You have to do most everything on your own, pretty well, self-sufficient. I was sitting here at the shaving horse. It’s a real handy tool, one that we can’t do without on the farm. All it really is, is a foot help clamping device. These chisels, they came from Virginia with the family. I’m making right now — I’m working on a walnut dough bowl. It’ll take another week’s worth of cutting and pecking on it. 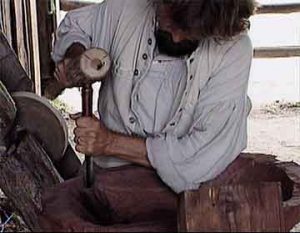 Carpenter or woodworker
Chiseling a bowl from walnut wood to be used for making bread.

What do you do when you need help building a barn or something?

Back when we built the barn we spent, oh about six months. We spent about six months cutting the timber and hauling it in preparing it. Then we called in our friends and neighbors and we had us a “working.” Most folks know the phrase of a barn raising or house raising. But around here we call it a working. And for that reason it may be working corn or log rolling or hauling or the like. But it’s also a social event. At the end of the day we have us a barn built and all our friends and family are around We celebrate that with a good, hearty meal. 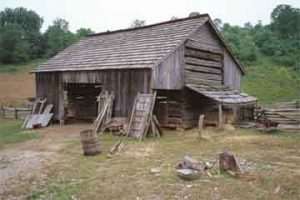 When we first built the house, we built it as a single pen home. It just had the front room that you came through and a loft upstairs and that’s usually where the children sleep and we also sleep in the room downstairs. We have feather beds over in the corner. Well, the feather mattresses are held up by rope woven through the bed rail. Periodically, we have to tighten up the rope because it loosens up from the weight of people sleeping on it. So you always want to sleep tight, sleep on a tight rope. We’re going to have to make a cornshuck mattress to put on top of the rope. Right now we just have a feather tick on there. 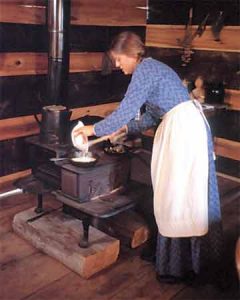 Breadmaking
Making cornbread in an iron skillet on a wood stove.

What was it like sleeping on a bed with just rope under the mattress?

Remember the saying. “Sleep tight. Don’t let the bed bugs bite.” Well this is what to “sleep tight” is–to sleep on a tightened rope bed and at the post of the bed, often we set it down in a little bowl or something that has camphor in it. And that deters the bed bugs from getting in with you. 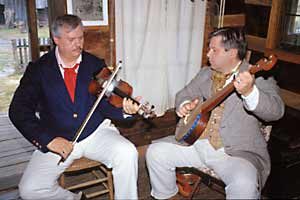 Musicians
Everyday life was hard, but there was time for music and other social events.

Why did most churches only meet once or twice a month?

Around here, in these parts, well the church is a very important thing to these people. It’s backwoods. It’s isolated. I’ve already worn out a couple good horses just trying to keep my preaching appointments from one week to the other. I’m only able to give this church any attention one Sunday and Saturday a month. I have other preaching places on other Saturdays and Sundays. Besides that even during the week. But many times in many seasons, this is the only chance that our people have a chance to get together. 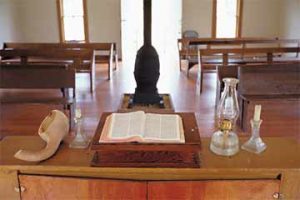 Old church
This old church had hard wooden benches and was heated by a wood stove.